March 2 sees the launch of National Usher Syndrome Awareness Day with the NHS showcasing a series of short films, videos and support statements throughout the day on their social media channels. This will include representatives from the NHS, Directors, MPs, and Professors in Ophthalmology, CEO’s of leading charities and influential figures – to raise awareness and highlight the need for further research into this rare condition.

Usher Syndrome, named after Charles Usher the Scottish Ophthalmologist who identified it, is a complex rare genetic condition with many symptoms including sight loss combined with varying degrees of deafness. There is no current cure or treatment, and it is estimated that there are around 400,000 people living with this condition worldwide.

Jo White (Milne) from Gateshead is founder of the CUREUSHER charity. She was diagnosed as profoundly deaf at 16 months but wasn’t registered as blind until she was 29 and found to have Usher Syndrome. In 2014 she underwent a cochlear implant operation, giving her the ability to hear for the first time. Jo, who is the author of an autobiographical book ‘Breaking the Silence’, has long campaigned to raise awareness of Usher Syndrome.

On speaking of the new awareness day, Jo said: “I have dreamed of this moment for such a long time and worked so hard to make it happen. I am so pleased we have the support of the NHS and several politicians; it is so exciting.”

Northumbria Healthcare NHS Trust are leading the way, with an aim to raise awareness of Usher Syndrome within their 11,000+ staff, and with help from the Shadow Minister for Health & Social Care. 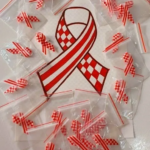 Wear the ribbon dedicated to usher syndrome, with red stripes representing the red stripes on a mobility cane, and red chequers to represent the chequered harness on a guide dog to start a conversation with your friends, neighbours and colleagues. Buy your ribbon here: www.cureusher.org/shop

If you are an NHS employee, you could recommend to a senior member of staff that your Trust takes part.

Thank you for your booking: National Usher Syndrome Awareness Day. We will be in touch soon to confirm your place.