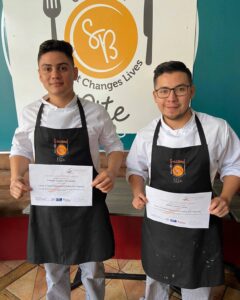 William [aged 26] and Franklin [aged 23] are Asylum Seekers from El Salvador that were housed in North Shields by the Home Office when they entered the UK in February 2020. As a young gay couple they had experienced persecution, violence, discrimination and prejudice in their home land due entirely to their sexual orientation. They came to the UK hoping for a new start where their opportunities and well being were dependent only upon the effort they put into making their own futures better. Their application for Asylum is being considered by the Home Office with inevitable delays associated with COVID-19.

El Salvador is one of the world’s most violent countries, with a large proportion of this violence being aimed at trans women and gay men. Those responsible for the violence are mostly street gangs and state security forces, whose homicide attempts, threats and injuring of people have led to many LGBT individuals leaving the country. For those that remain the discrimination at every level has left large sections of the LGBT community living on the edge of poverty and dealing with the stigma they bear due to their sexual or gender orientation and identity.

Less than two months after arriving in the UK, lock down for COVID-19 was announced, and Will and Frank found themselves in a very difficult and unfamiliar situation. With Spanish as their first language and just a small amount of English between them, they found out about the Cedarwood Trust and approached them for help, accessing the community meals service and volunteering in the garden. As lockdown continued and supermarket shortages made living on the £35 a week benefits more difficult, the community meals from Cedarwood became a much needed lifeline for them. 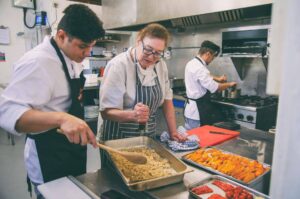 Both young men are hard workers, and keen to contribute. However until their Asylum application is reviewed, they are unable to seek employment. Prior to coming to the UK, William had worked in a bank and Franklin in customer services at a bakery. Both share a love of food and cooking, but William prefers savoury foods whilst Franklin has both a sweet tooth and a love of baking.

They heard about the Second Bite Catering Academy via the Cedarwood Facebook page and applied for places, with them both becoming our first trainees since lock down.

“I found out about this course through the Cedarwood Facebook page. About the opportunity of an experience, of learning the care and processes within a kitchen. I have learned from the most basic rules of hygiene, the different cuts for the preparation of dishes. This has been a great experience for me and will help me get a better job opportunity”. Franklin

At the start of the placement their English was so poor that they did not know the word for ‘spoon’ – so with much hilarity, a trainer with a smattering of Spanish and liberal use of mime and Google Translate they began their training. During the 6 weeks training they have developed their skills in the kitchen, learnt more English and about English Food, shared their knowledge of traditional El Salvador dishes and completed in English a Level 2 in Food Hygiene and Safety. They also delivered a 3 course meal to 13 members of the Whitley Bay Round Table – on their own with just trainer chef guidance, which received excellent reviews.

As part of the wrap around care offered by the Second Bite Academy and Cedarwood Trust they were signposted to ESOL and have started a year long course. They have also had support for travel expenses and continued with some community meals. However during their training they also actively contributed towards cooking over 1000 community meals for those in need whilst learning valuable skills.

“I found out about the course on social media on the Cedarwood Facebook page. In these 6 weeks I have learned a lot about hygiene, handling, care and food preparation. I have really enjoyed this course and it has been a great experience for me and it will help me in my future and achieve a job opportunity”. William 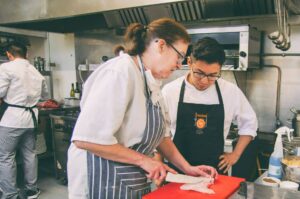 They have now moved through the 6 weeks training into a 6 week work experience placement at the Second Bite Bistro. Here they are working in the kitchen during the busy weekends and are valuable and appreciated members of the team. At the end of the work placement they are keen to continue to volunteer in some capacity to further develop their catering skills and ‘give thanks’ for some of the support they have received. In the longer term, they have incredible potential to develop as chefs once they are able to take full time employment.

Their Chef Trainer, Jenny, reports that they have been an absolute pleasure to work with from Day 1. Every day they have turned up on time, in clean and pressed chef whites, and given 100%. She knew that their interest and enthusiasm was genuine when after their first week of training they sent her a video of them making ‘mashed potatoes’ at home. It was new to them and the only thing they had cooked that week that they could afford to make themselves. Since then they have developed week on week, and in their last week of training turned teacher and showed her how to make Tres Leches ‘3 milk cake’ which was absolutely delicious.

William and Franklin have both said that they have had the opportunity and experience to work in a professional kitchen, learning about the care and processes, food hygiene and handling, food preparation and different types of cooking and food. They have really enjoyed the experience, are thankful for the great teaching and ‘patience’ and feel that once they are able to seek employment it will help them in the future and get them better job opportunities.

Thank you for your booking: Second Bite Catering Academy case study: William and Franklin’s Journey. We will be in touch soon to confirm your place.