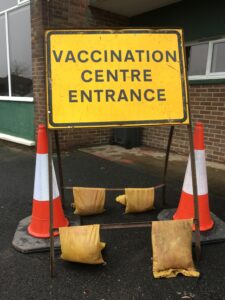 Meantime, off for the second jab at The Parks, North Shields. I felt cheated when the first jab produced no symptoms while the odd friend boasted of dizziness, fatigue, coughing or possibly St.Vitus dance.

The second jab produces few side effects apparently, so my chance has probably gone, and I cannot temporarily retire to my bed,

Being a bit ill appeals. Not the virus, something less drastic. The possibility of lying down for a week with no responsibilities. Aaah!

Pills-aversion mean I rarely take medication and switch off when the conversation turns to ailments (many older people talk of little else). Hence, for years I thought Paracetamol was a small country in South America.

Back to The Parks. I liked being there. The jab experience brings a sense of order and good sense. There were not many of us and we were well-spaced out in a hall the size of an aircraft hanger. An unspoken sense of camaraderie pervades. We are, each one of us, part of that fragile, brilliant, maddening, irresistible species called the human race and the moment affirms our vital interdependence. The volunteer staff were calm, polite, caring, the opposite of a jobsworth.

I found myself wondering – is there some strange process making us more positive and enthusiastic when we’re engaged in unpaid, volunteer labour? If so, maybe it’s time to base an entire new political philosophy on this fact.

I was escorted to one seat, soon after led to a second, before being invited to an actual jab chair.

My ‘jabber’ was a pleasant attractive young woman called Jen who smiled, chatted then produced the needle. Its sudden presence can make even the most gung-ho among us suffer a momentary sense of unease.

You mean they’re going to stick that weapon in ME?

Hardly time to consider the ramifications before the needle was in and out – less time than it takes to blink and with as little discomfort.

I was then led to a fourth seat for the fifteen minutes recovery. After six minutes I stood up and slunk off to pedal the four miles home. As I did so, a sense of guilt and betrayal weighed on me like a bucket of lead. My heart pounded with the expectation I would hear the booming voice “And just where do you think you’re going?”

For those twenty minutes, I expected the flashing blue light of a pursuit vehicle. Even after the journey, when safely inside, I furtively peeped round the curtains for any sign of the forces of law and order. What defence could I give for such a flagrant abuse of the law that may, for all I knew, put the entire national vaccination programme at risk?

I attribute these feelings to a catholic upbringing which leaves an individual dragging behind them lifelong a ball and chain of guilt. No matter I am long lapsed. Catholic guilt is not ephemeral. It does not wash out.