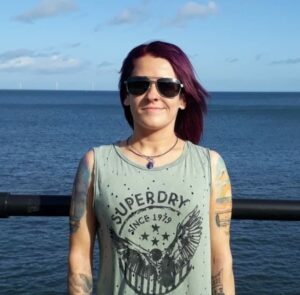 Kerry is one of our amazing Good Neighbours walking buddies, who has been working hard to help her fellow North Tynesiders during the pandemic. However, she did not start out as a volunteer, but instead she herself was on the receiving end of support from another of the Good Neighbours’ team. Her experiences of receiving this support inspired Kerry to sign up to help others once she was able to.

In 2017 Kerry caught the flu which developed into a chest infection. She went from having cold symptoms to seizing in a short space of time and ended up on life support for five days. Kerry now takes a daily steroid for her asthma.

Kerry had been volunteering for Beach Access North East, but had to stop during the pandemic. She anticipated how things would go with the spread of Covid-19 and starting shielding two weeks before the national lockdown. Kerry felt guilty about this as it meant her parents had to shield as well and she’d already suffered with poor mental health in the past.

Kerry and her parents wanted to eat as healthy as possible with quality ingredients. They started to panic when they tried signing up for a supermarket food slot and none were available, and there was no fresh food in the house. It meant so much to Kerry that a Good Neighbours volunteer, Kim, brought her shopping that week. It helped Kerry realise that society still cared about her and that she wasn’t a burden or worthless, but valued. She’d never been so excited to see a bag of shopping.

“A complete stranger risked her own safety and took time out of her day to help.”

Kerry’s family were able to access some supermarket slots after this point and began to receive a regular food parcel via Good Neighbours. Kerry found that was easier to ask a stranger for help as she knew a volunteer definitely meant it. Kerry thought the process of receiving a food parcel really straight forward.

Kerry came out of shielding in July after keeping an eye on the infection rates. She’d been out of the house once after 10 weeks, but found after weeks of shielding she was terrified of the world and everything in it. Kerry had previously worked in the care profession, which wouldn’t be possible again until a vaccine became available.

Kerry wanted to feel useful and raised some money for the Samaritans by climbing the St Mary’s lighthouse several times in one go. After that, she saw that VODA was looking for walking buddies and thought she’d be perfect as she’d gone through shielding herself and was low risk to others.

Kerry now has two walking buddies. Anne is not used to walking far and tends to use a wheelchair. She has poor eyesight and does not feel confident on her feet. They walk together to the end of the street and back, but are building it up each week. Anne needs to hold to Kerry’s arm, but they both wear facemasks and feel quite safe walking out in the open air.

Kerry also visits Trish once a week, who used to be an agony aunt and has some fantastic stories. Kerry appreciates all the wisdom that Trish shares and has grown extremely fond of her. Kerry sits in the garden by the backdoor and Trish sits inside at a distance, which again feels perfectly safe.

Trish is undergoing chemo and does not have long to live. She would like to capture her life experiences, but is getting very tired and asked Kerry if she knew of anyone who would do it. Kerry keenly volunteered and takes a voice recorder to their meetings in order to write up what Trish shares. She hopes to put together some bundles for Trish’s family as a result. Kerry experiences bad anxiety, but has found that Trish has rubbed off on her. Every opportunity Trish has been presented with she’s said yes, which has inspired Kerry and has had a real positive impact on her life.

Kerry’s highlight from volunteering has been meeting Trish.

“I’m so grateful that things in the universe have aligned that we’ve been brought together.”

Kerry would advise anyone to take a leaf out of Trish’s book and say ‘yes’.

“You will get far more out of it that you would ever realise.”