Lessons learned from regional voluntary action in a time of Covid

On 14 July 2021, VONNE hosted an online event, funded by National Lottery Community Fund and attended by organisations from across the North East, to consider lessons learned from voluntary action over the previous year to help out during the pandemic.

As an introduction to the discussions, Professor Irene Hardill and Dr Laura Crawford from Northumbria University provided an overview of the national study into Mobilising UK Voluntary Action in a Time of Pandemic, which was led by NCVO, The Institute for Volunteering Research and a number of universities, including Northumbria University which led much of the research. The study considered four different themes – mutual aid and neighbourhood activity; collaboration and partnership; inequality and need; and innovation.

The study has found that the speed at which local groups formed to support members of their community was remarkable, with 4000 mutual aid groups registering on the COVID Mutual Aid UK website during the first lockdown in April 2020. These informal organisations were often able to respond much more quickly than the formal organisations and were able to help engender trust within communities, but their informal nature has made it difficult for them to operate at times and to sustain the enthusiasm of volunteers.

During the pandemic there has been an increase in the spirit of collaboration and partnership across sectors and between organisations. Bureaucratic processes were streamlined and data was shared to ensure that support reached the most vulnerable. As local government was not always best placed to respond, there was increased work between local authorities and local charities and this partnership working appears to be continuing.

The pandemic exacerbated and brought into sharp focus pre-existing inequalities, as well as highlighting new areas of need. Many voluntary organisations found that they were unable to deliver support remotely and online and this in turn impacted on some of the most vulnerable groups, some of whom did not have the means to access online support. The impact on health and wellbeing of older adults who had previously volunteered but had been forced to step down from their Volunteering roles and shield at home was noted.

The pandemic did however accelerate modernisation and encourage more agile ways of working. Digital technology was increasingly used to mobilise and manage volunteers, and many charities moved to online support.

Moving on, the Mobilising Voluntary Action project will consider how the protracted nature of the crisis has impacted motivations to volunteer and the changing nature of volunteer roles and the needs they are responding to. Consideration will be given to which parts of the voluntary sector may require further support to re-emerge and re-engage in a post COVID world, and what ‘innovations’ or ‘learnings’ may be here to stay.

As a further lead-in to roundtable discussions, brief overviews of action taken during the pandemic were provided by:

Dreamshine CIC – perspectives on voluntary action from a volunteer-involving organization

Dwellbeing Shieldfield – perspectives on voluntary action from a cooperative of residents and community members set up to shape life in Shieldfield, Newcastle

How can we sustain the involvement of new volunteers/community action beyond the pandemic?

The Jamboard created to capture all of the comments made during the discussions is attached.

What examples are there of good practice for voluntary action to support communities and individuals in times of crisis?

What might be the best ways of ensuring that good practice developed during the pandemic is shared and rolled out into wider voluntary action?

What is the role of funders, public sector, businesses etc. in supporting the development of new types of voluntary action? 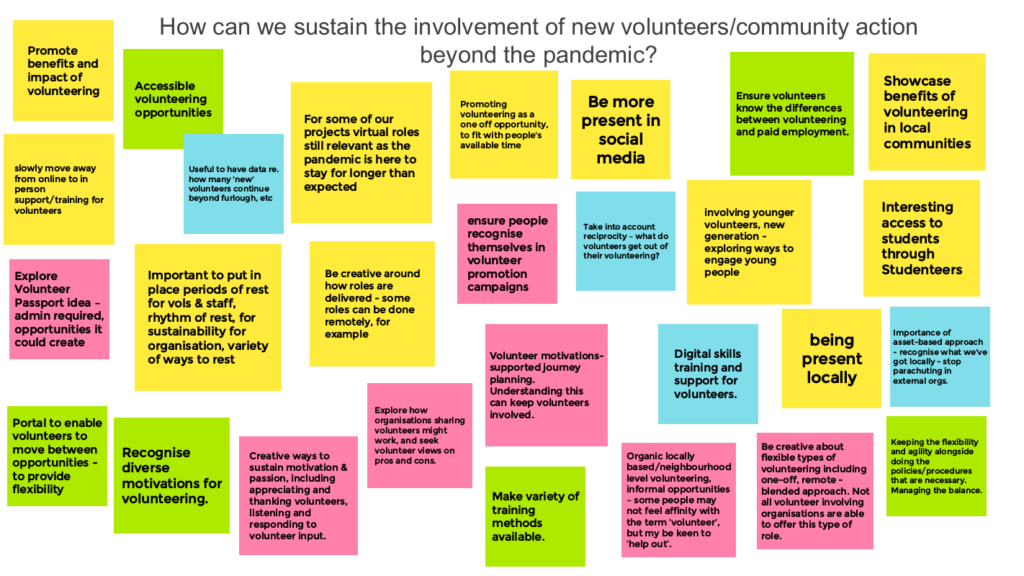 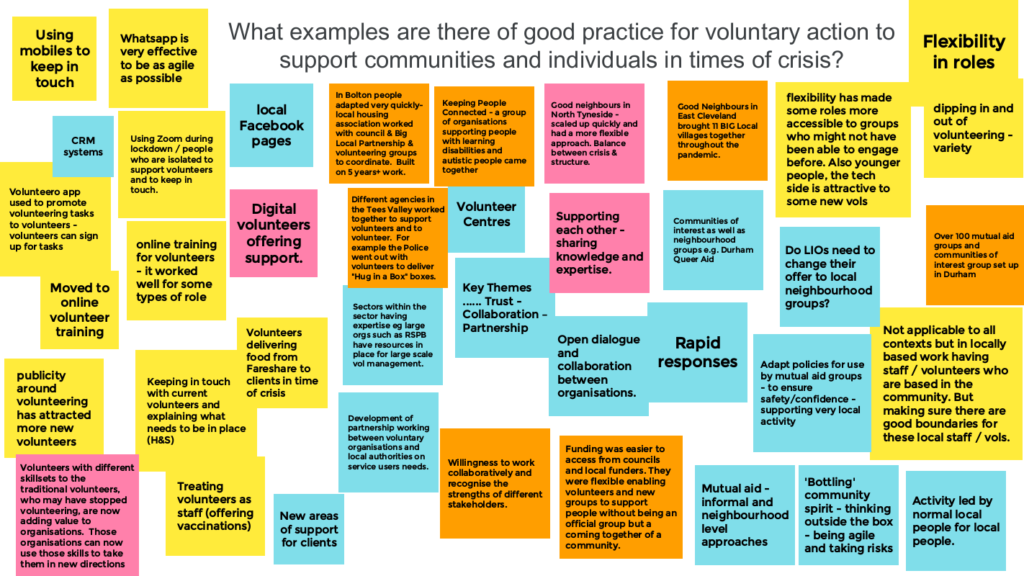 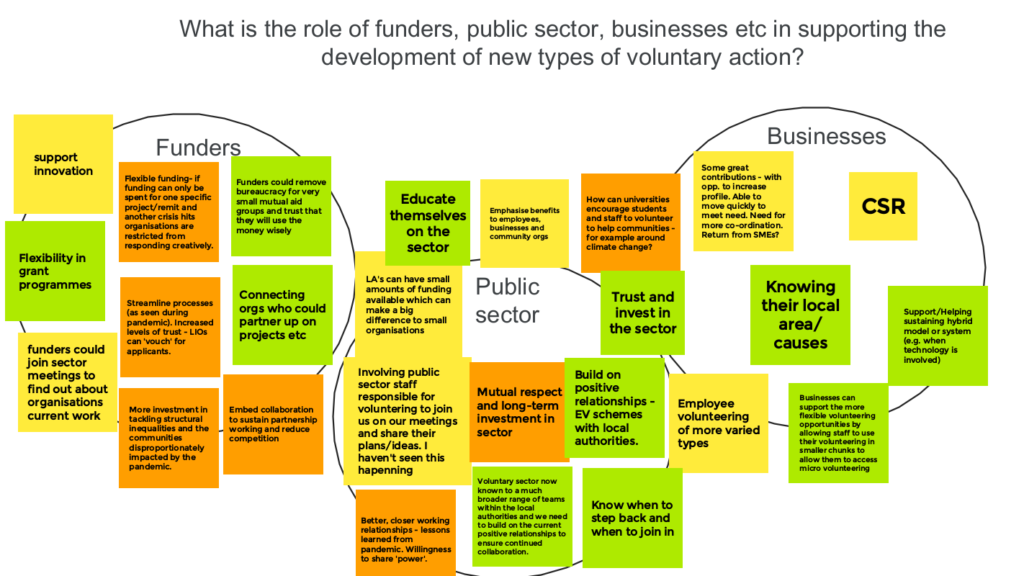